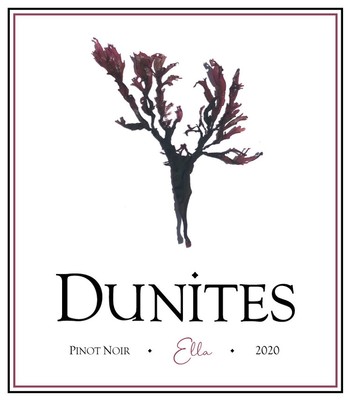 Ella Young was widely known as the godmother and inspiration for the Dunites. Born and educated in Ireland, Ella was a well-regarded poet and historian of Gaelic and Celtic literature. She later held a chair post at UC Berkley while lecturing at numerous American universities on both coasts. In the 1930s, Ella joined the community of the Dunites and it was through her friendships with iconic artists of the times, such as Ansel Adams, Alan Watts and Georgia O’Keefe, that led many of them to visit the dune community.

Pinot Noir is rightfully one of the most noble wine grape varieties in the world. When grown in the right location and handled thoughtfully it can produce wines that are truly transcendental. With Ella, our aim was to craft a wine that is easy going and celebratory, all while retaining the nobility and character of Pinot Noir.

Glou glou is a style of wine that has gained a lot of popularity over the past decade. I first encountered the phrase and wines while living in France as it described the fresh, fruity and deliciously drinkable wines from Beaujolais. Thus, the term roughly translates to gulp-gulp in English. The style has since evolved as an umbrella term for any fruity red wine that is high in acid, low in tannin, and for lack of a better word, chuggable. Often these wines are made using carbonic maceration or by blending red and white grapes. For this wine we blended white Pinot Noir from Chêne Vineyard with red Pinot Noir from Bassi Vineyard. The result is a wine that is light and bright in color and loaded with cherry flavors. This is a light bodied red wine that is best served with a slight chill and can be thought of as falling in the arc between a Rosé and a classic Pinot Noir. This wine would pair excellent with a vegetable curry, pulled pork, or homemade pizzas. It was bottled unfined and unfiltered with minimal effective SO2 to preserve freshness.

Be the first to review this item »
In Stock
Tweet